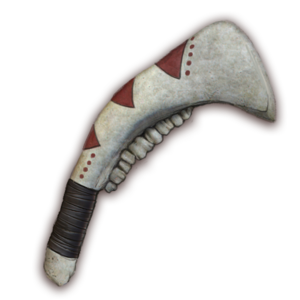 A Tomahawk Club, one of many weapons in New Dawn.

Weapons can be created and used in combat against animals, pirates, and other players.

Native weapons such as knifes, bows, tomahawks, axes, etc can be crafted directly from the crafting window in your inventory. You will only need to gather the resources needed for the crafting.

Other more advanced weapons such as Musket, Flintlock, ammo, Caltrop, etc. will require that you first gather recipe pieces from the chests found in the pirate camps and outposts. These pieces are then combined at a Workbench. Then you will be able to craft those weapons at the workbench you assembled the recipe at. If you delete that workbench, recipes in it will be lost and you will need to find new fragments again.

Some weapons cannot be produced since their recipes are unavailable and those can only be found as assembled units at the same chests you find the recipe fragments at.